Over the Easter break I was lucky enough to complete a three week placement in the conservation studio at Lambeth Palace Library. While I was there I worked on a book of military maneuvers, printed in London in 1628, which had a number of fold out engraved plates (one of which had been inserted upside down!). The book was a tight back, full bound in speckled calf leather with blind and gold tooling, and the stubs of four ties. There were five raised bands, two of which were false. The textblock was a fine quality hand made paper, with plenty of deckle edges and charming signs of the making process. 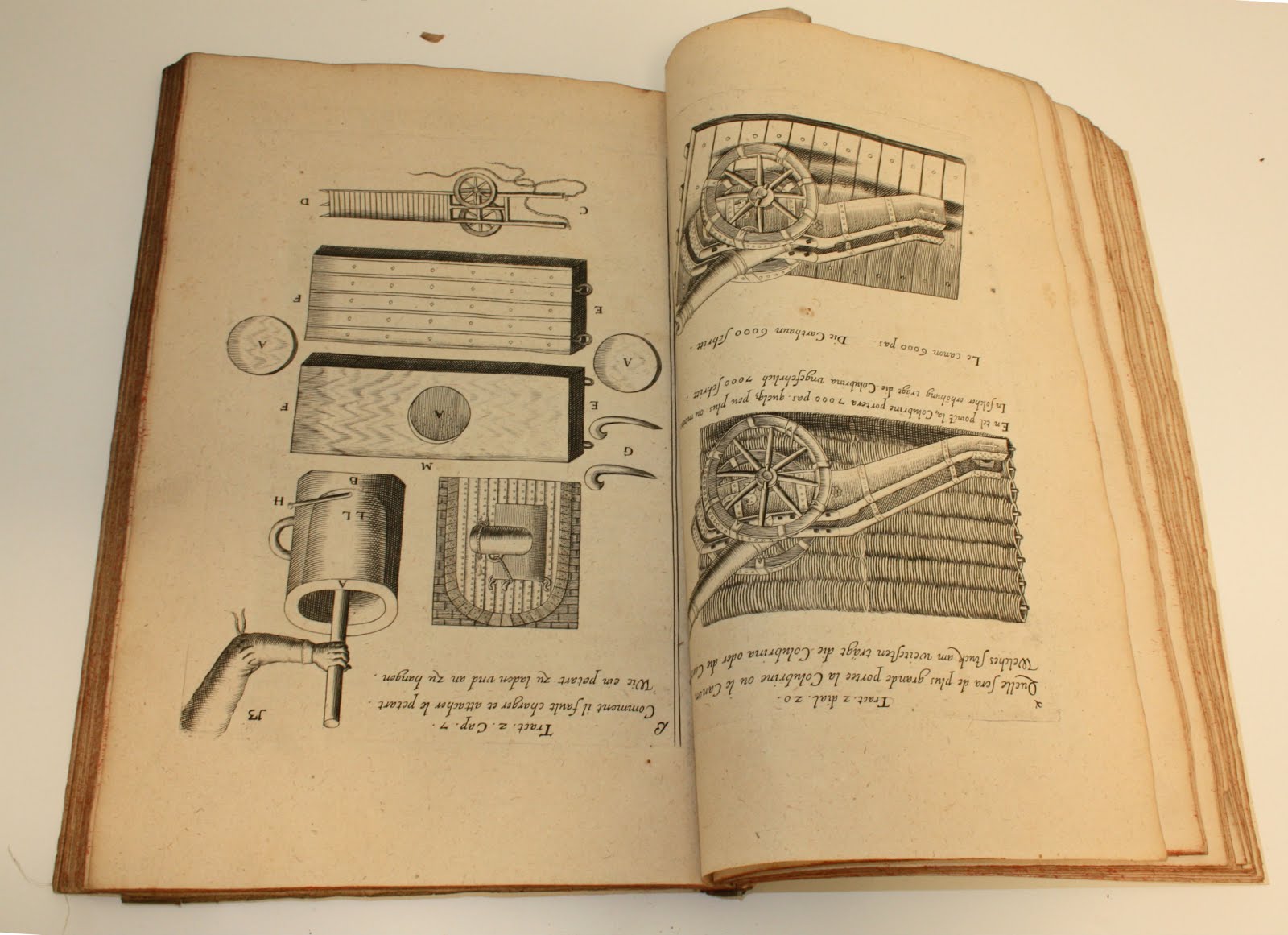 The 1628 book printed by Robert Norton, and a plate inserted upside down

The book, part of the Returned Books Collection was stolen from the library some time during the 1970s and suffered further damage at the hands of the thief, who worked at the library, and cut out the library stamp on the title page in order to hide the provenance of the object (see link at bottom of page for further information on the collection). An area of abraded paper (presumably also a library stamp which had been erased) on the final page of the textblock had been cut from the book, but had interestingly been adhered to a slip of additional paper and been left with the centre of the textblock - the reason for this was not apparent. Some of the plates had also been cut from the book, and only stubs remained.

Above: the cut out section from the rear of the book found within the textblock
Below: the cut out library stamp on the title page

The book had previously  suffered fire damage when the library was bombed during the Second World War, and had subsequently been rebacked with cheap leather which had led to both front and back boards becoming detached. New pastedowns and end papers had also been added.

Treatment
The plates in the book were frequently poorly folded and becoming damaged, where they were catching or extending beyond the edge of the textblock. Many of the folded plates required local humidification in order to re-fold them to their original positions.

The rebacked leather and linings were removed from the spine with a scalpel and a thick wheat starch paste poultice. The non- original endpapers were removed by cutting the whipping stitch, peeling off the mull and adding a little moisture. The added pastedowns were lifted using moisture and a spatula which revealed the beneath the original pastedowns. These showed an original shelfmark from Cambridge, revealing a little more of the history of the book. The pastedowns were then lifted at both spine edges in order to insert the board attachment.

The sewing on the textblock was very weak, and what to do was discussed with all conservators, who had all worked on similar books in the collection. It was suggested that a spine lining would hold the textblock together as the adhesive will seep through the first few sections. This was worrying for me, but I was assured that it happened often with these bindings because of their age and as they have already had a lot of work done on them in the past (not necessarily very sympathetically). This proved to the right, and a lining of a medium weight tissue with wheat starch paste held the spine well.

The textblock was surface cleaned with a chemical sponge and then the tears and losses in the textblock were repaired using lens tissue 9gsm and kozo-shi 23 gsm, toned with liquid acrylics. The cut out area of the title page (where the library stamp had been) was filled with kozo shi, in keeping with the treatment of the rest of the collection. The section that had been cut from the rear of the textblock and found adhered to a loose piece of paper within the textblock was immersed in a bath of water, to separate the two, and then readhered into the cut out section with a fine Japanese tissue on the verso. 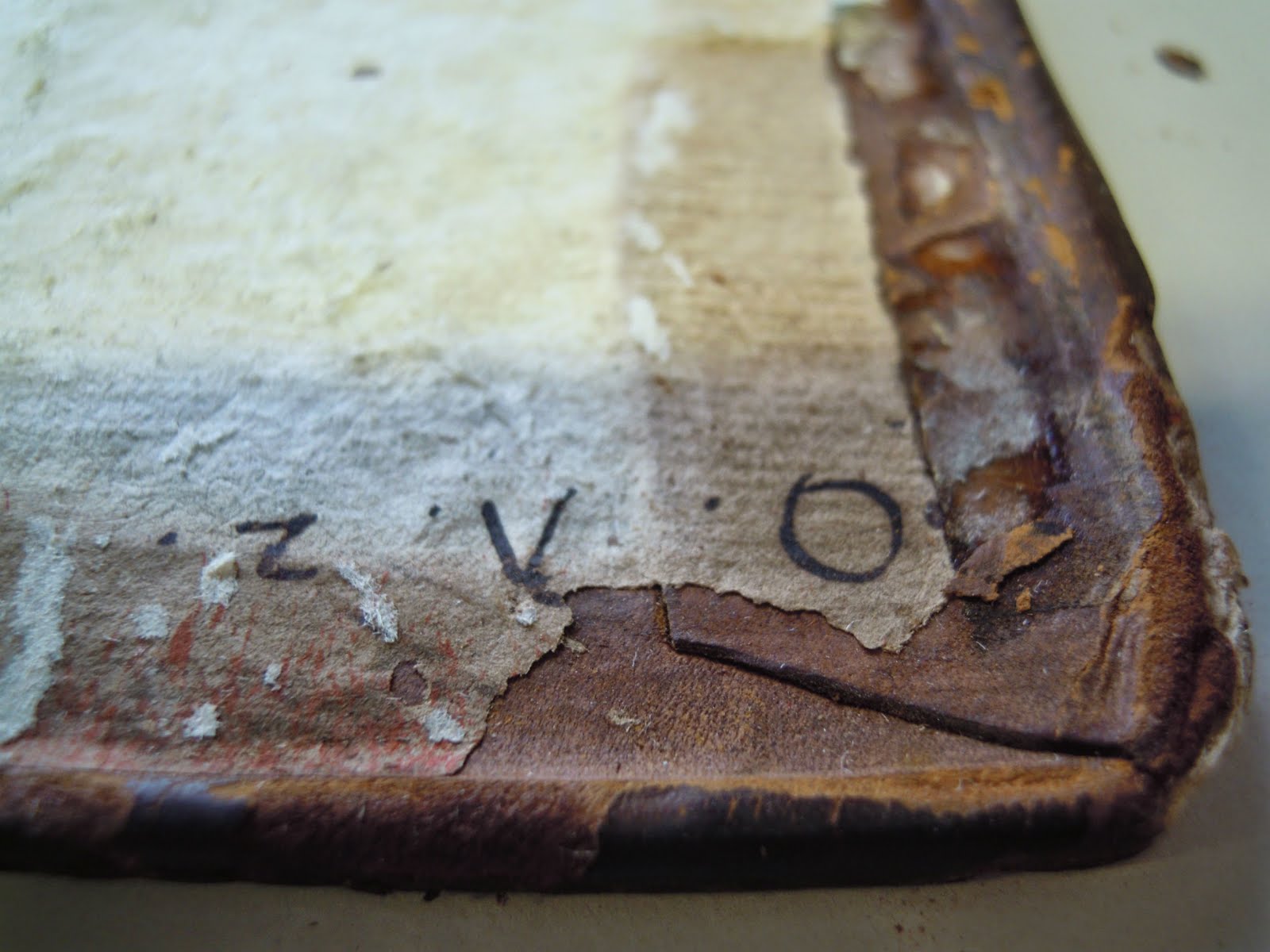 A Cambridge Shelfmark revealed beneath by lifting the later pastedowns

The original leather was then consolidated using cellugel and the old leather from the reback was removed from the boards . Leather that was friable and detaching was readhered using toned japanese tissue with a dry wheat starch paste (~ 25% w/v). 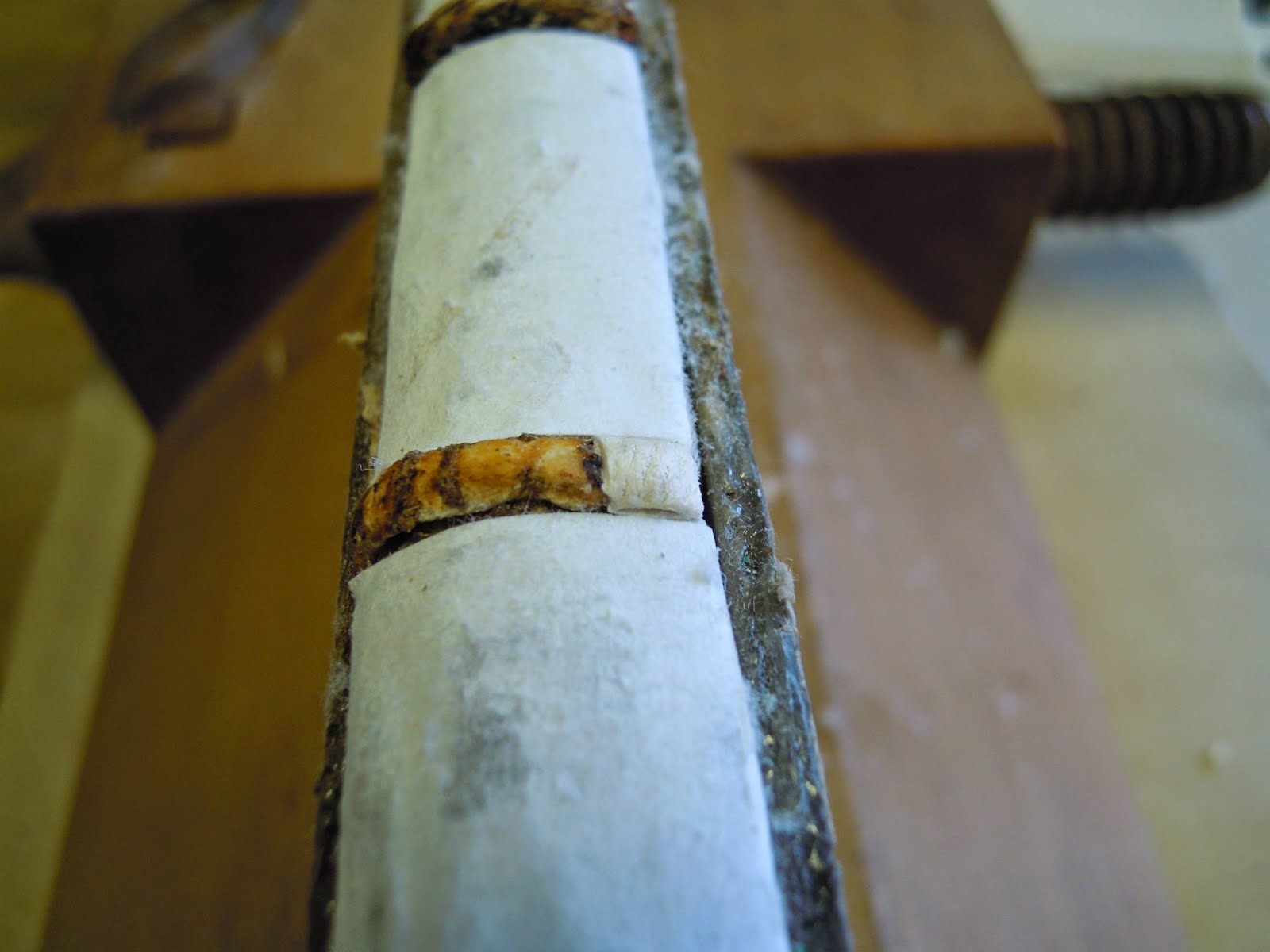 Aerolinen strips were added to spine with an inch extension front and back with EVA. A 40 gsm handmade Western paper was used to line the spine, and then sanded down to soften any bumps and unevenness on the spine. One of the alum tawed sewing supports was missing and so a layer of Japanese paper was pasted to the area as a barrier, and then a piece of rolled alum tawed skin was adhered with EVA. 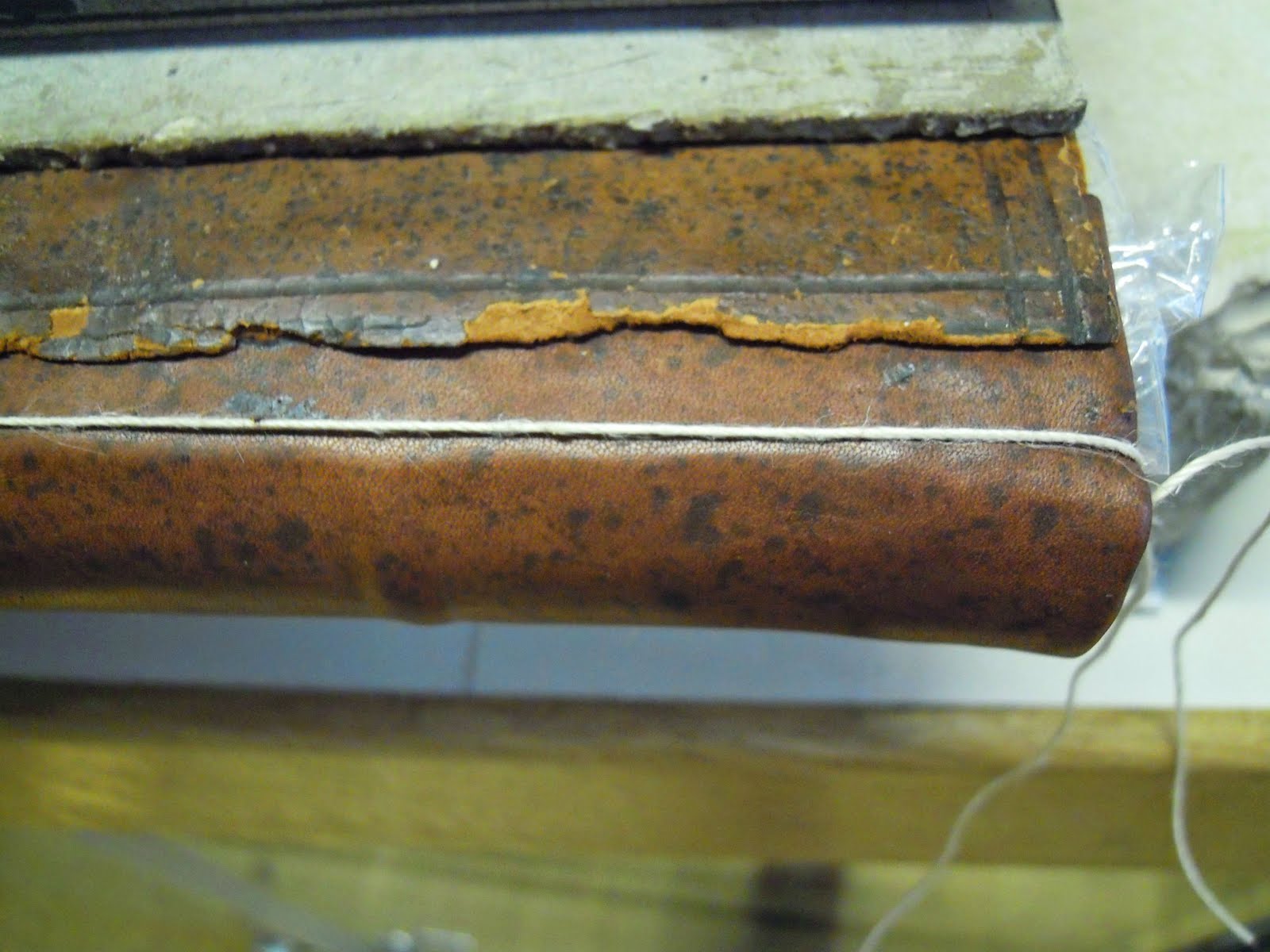 Working on the reback

Japanese paper was toned using liquid acrylics for the leather corners repairs and a piece of calf leather was dyed and speckled with selladerm leather dyes and a toothbrush. The leather spine piece was pared and a manila compensation strip was adhered to the boards. The book was rebacked and left to dry overnight. New endpapers were of folded 55gsm hand made paper  and a window was cut into the new pastedown to allow the Cambridge classmark to remain visible. The board corners were built up with leather parings and EVA, and all four were then repaired with toned Japanese paper.

It was great to do some gold and blind tooling on the spine - which I had never had the chance to do before. It went quite well!  Initially glair, lighter fluid and vaseline were used to prepare the area. 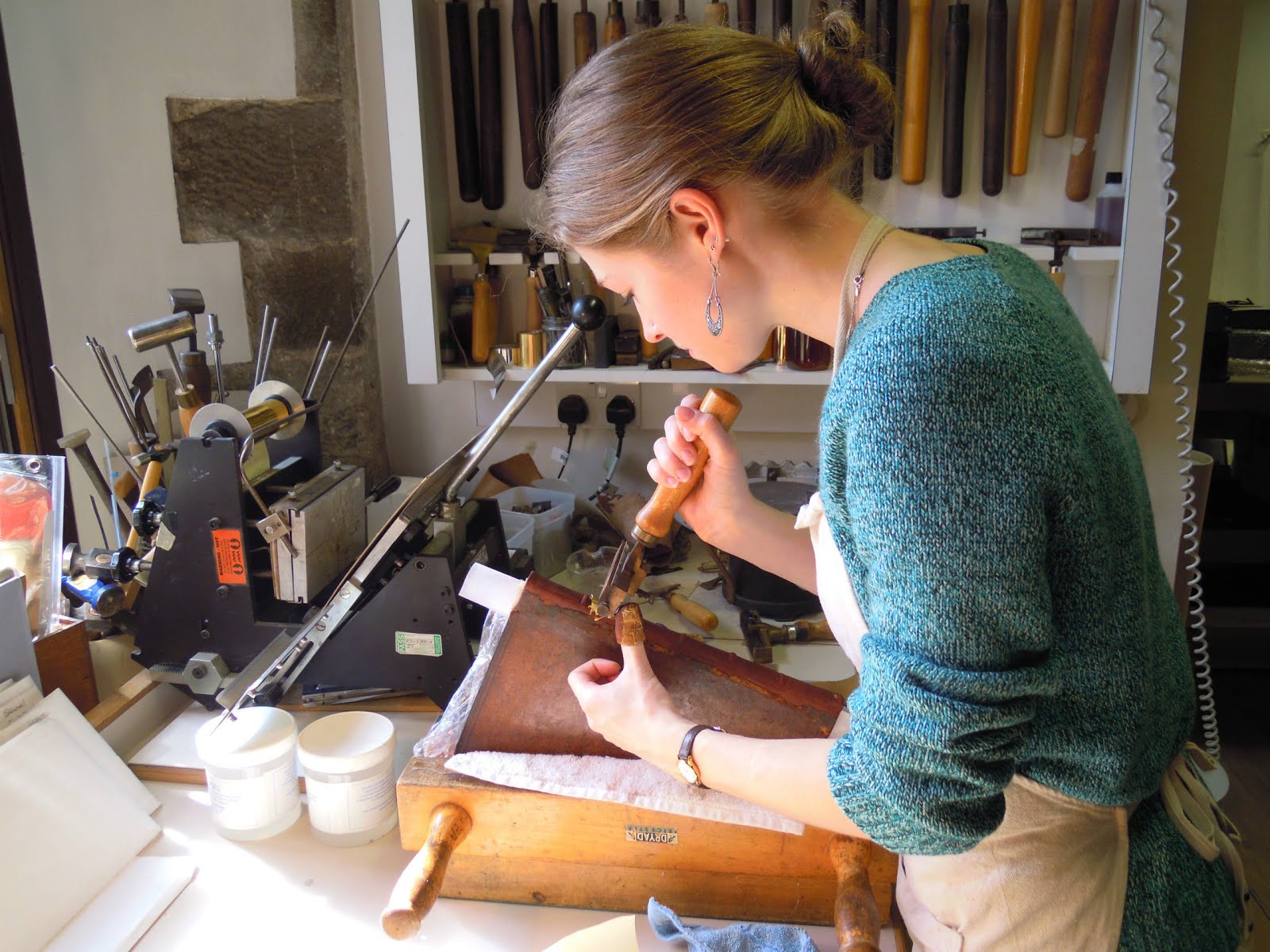 Me doing some gold tooling 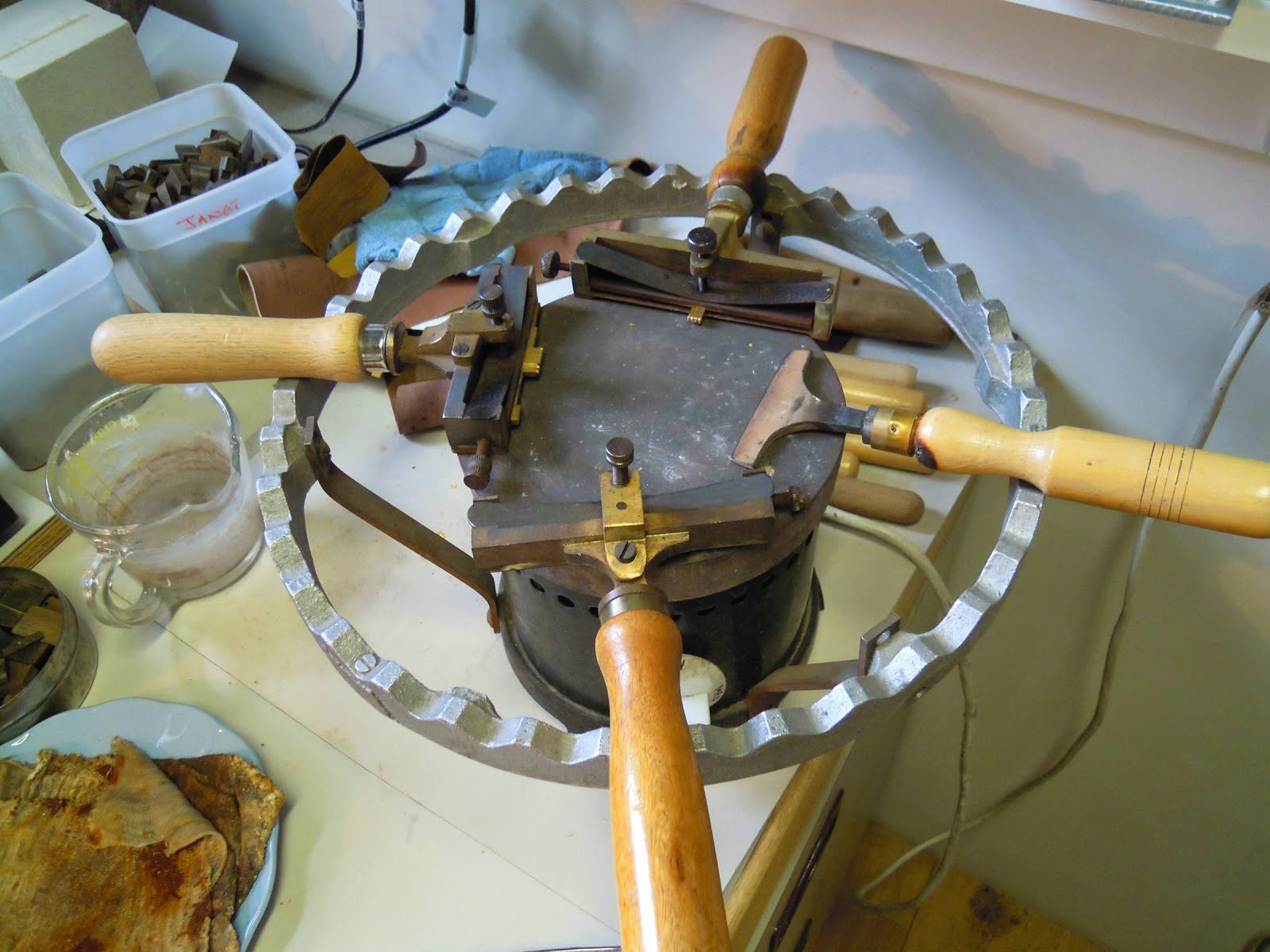 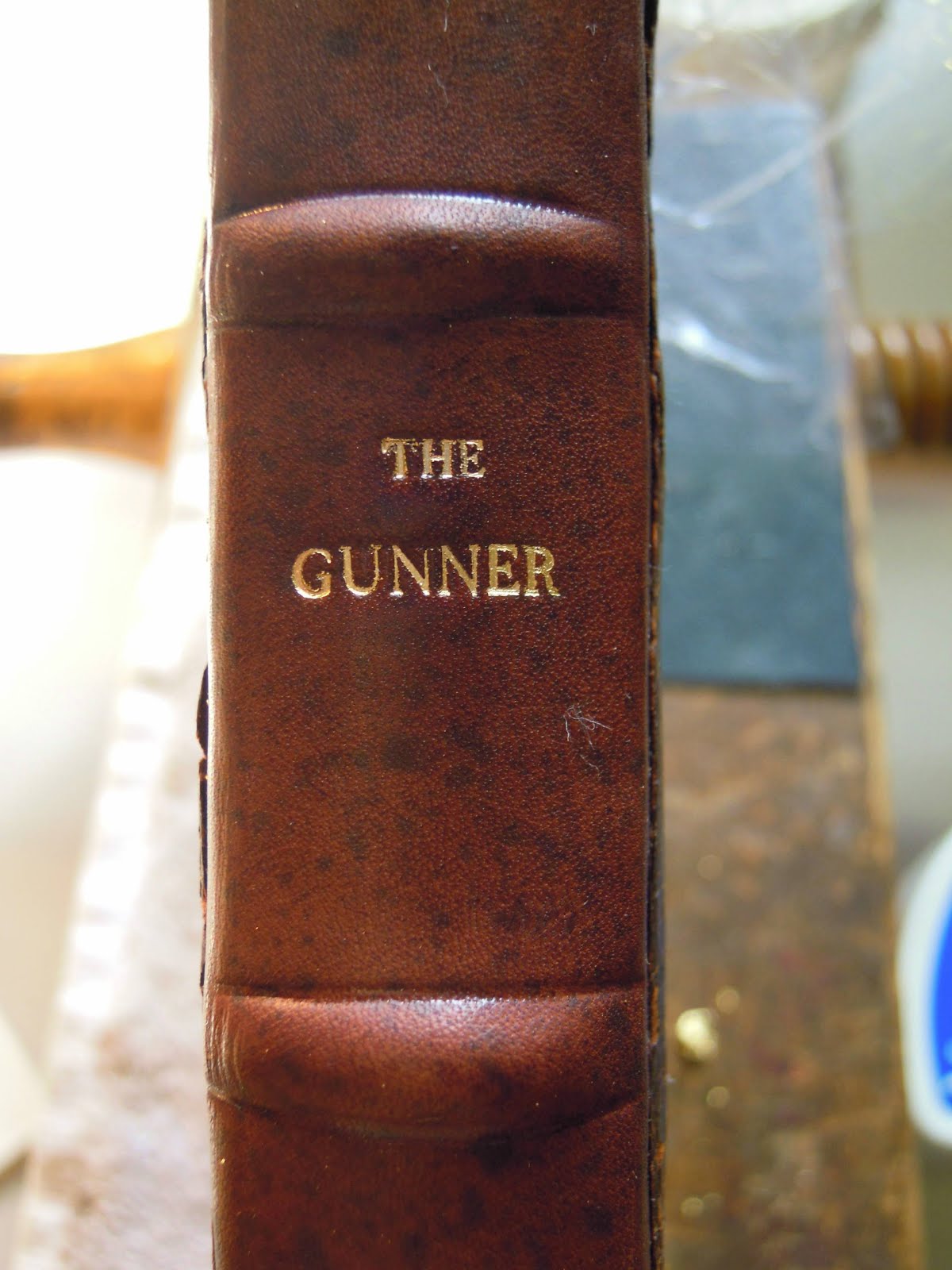 The tools and the final gold tooling

For further information about the Returned Books Collection at Lambeth Palace Library: http://www.theguardian.com/books/2013/apr/29/lambeth-palace-stolen-books-retrieved