The Conservation of a Scrapbook of 19th Century Fashion Plates 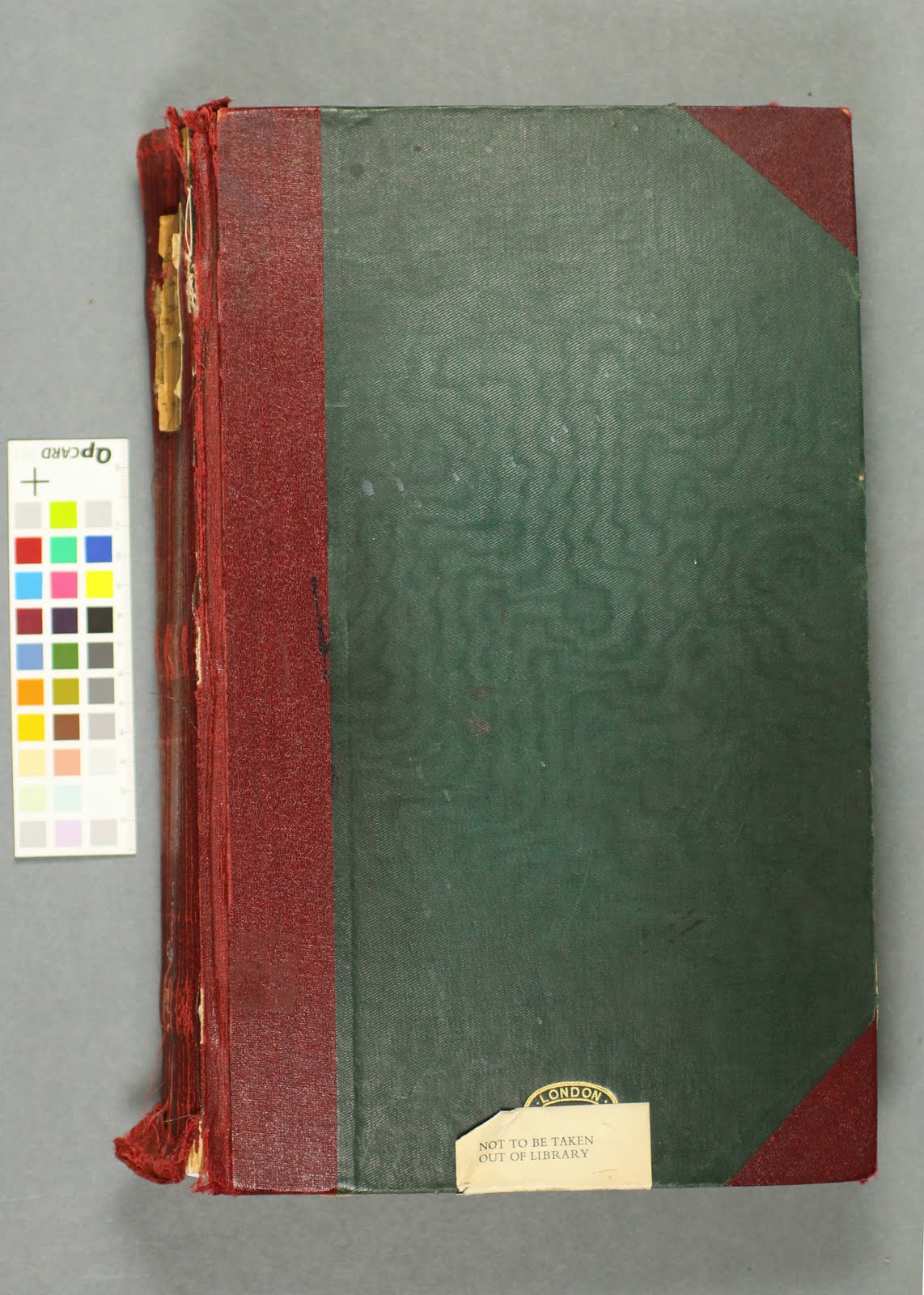 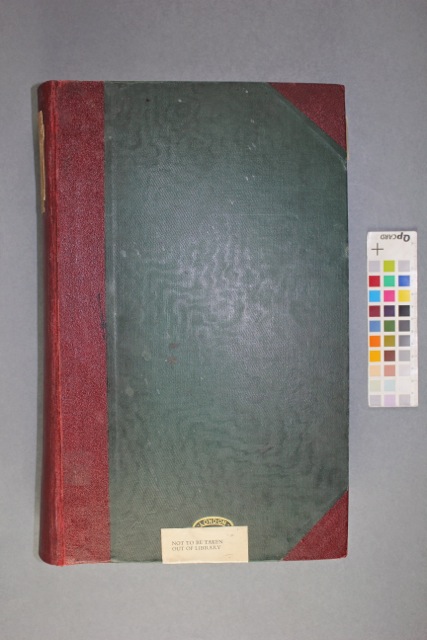 Before and after treatment

My final project was a scrapbook from Central St Martins College of Art and Design, containing 191 nineteenth century fashion plates. The book is half bound in red and green book cloth, and was intended for use as a scrapbook as it has compensation guards to accommodate the addition material. It was machine sewn, with a rounded, unlined spine, and machine made marble endpapers with cloth joints. 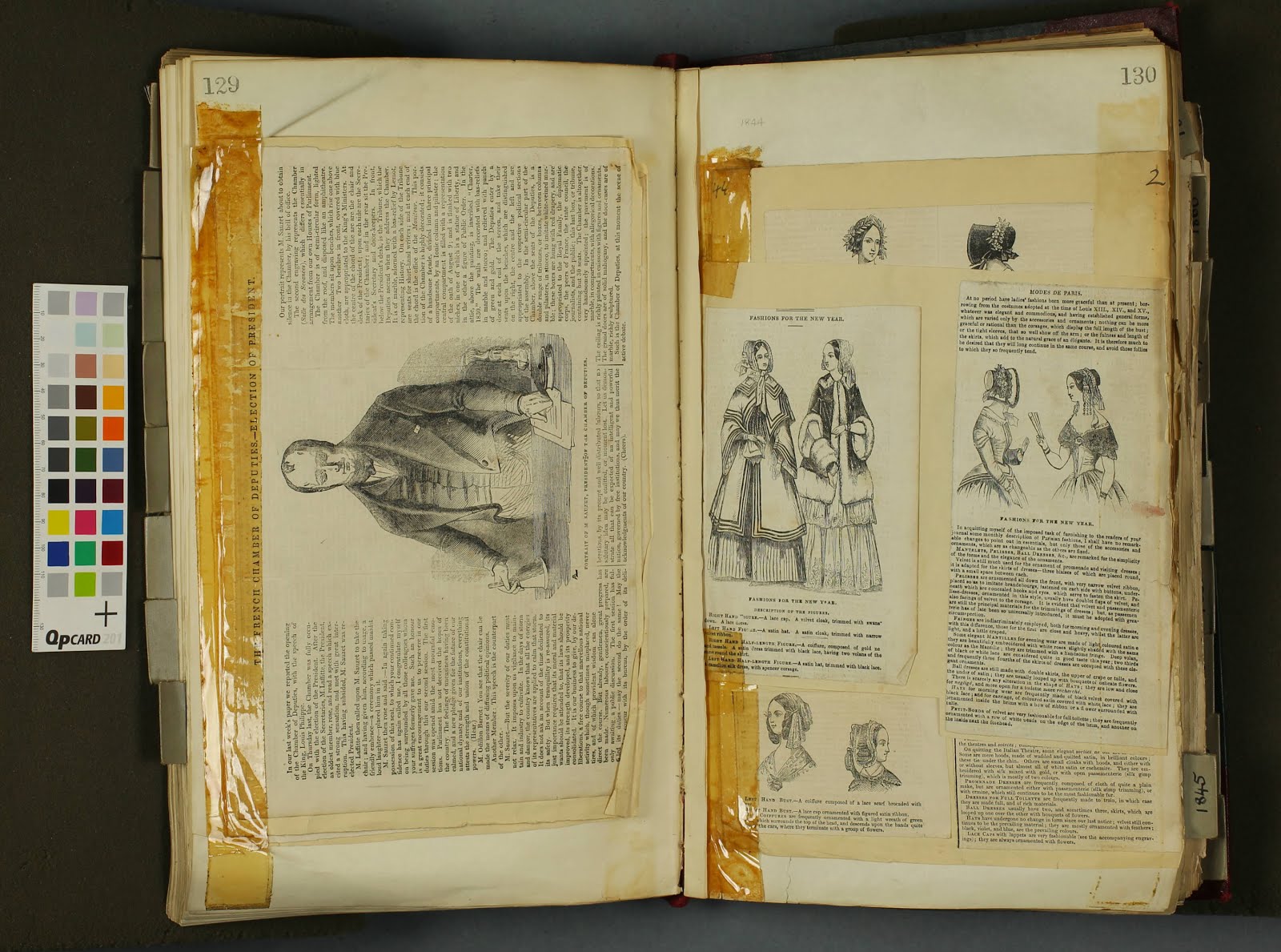 Fashion plates were published in magazines from the late 18th century and throughout the 1900s, and were a popular way for people to stay up to date with the latest high class fashions. They were rather prescriptive, with titles reading ‘morning dresses for July 1800’ and ‘evening promenade dress in May 1809’!
The beautiful plates are predominantly hand coloured engravings, and depict society women’s dress from 1800 to 1890, offering a fascinating impression of culture throughout the century. They are are taken from many different publications, including Lady’s Magazine and La Belle Assemble, and are in both English and French. 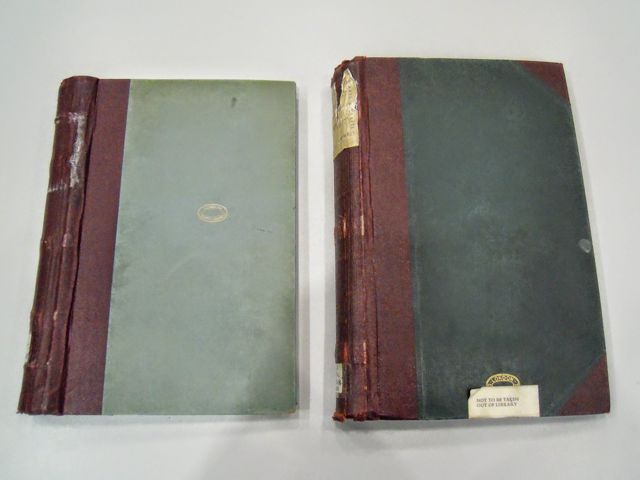 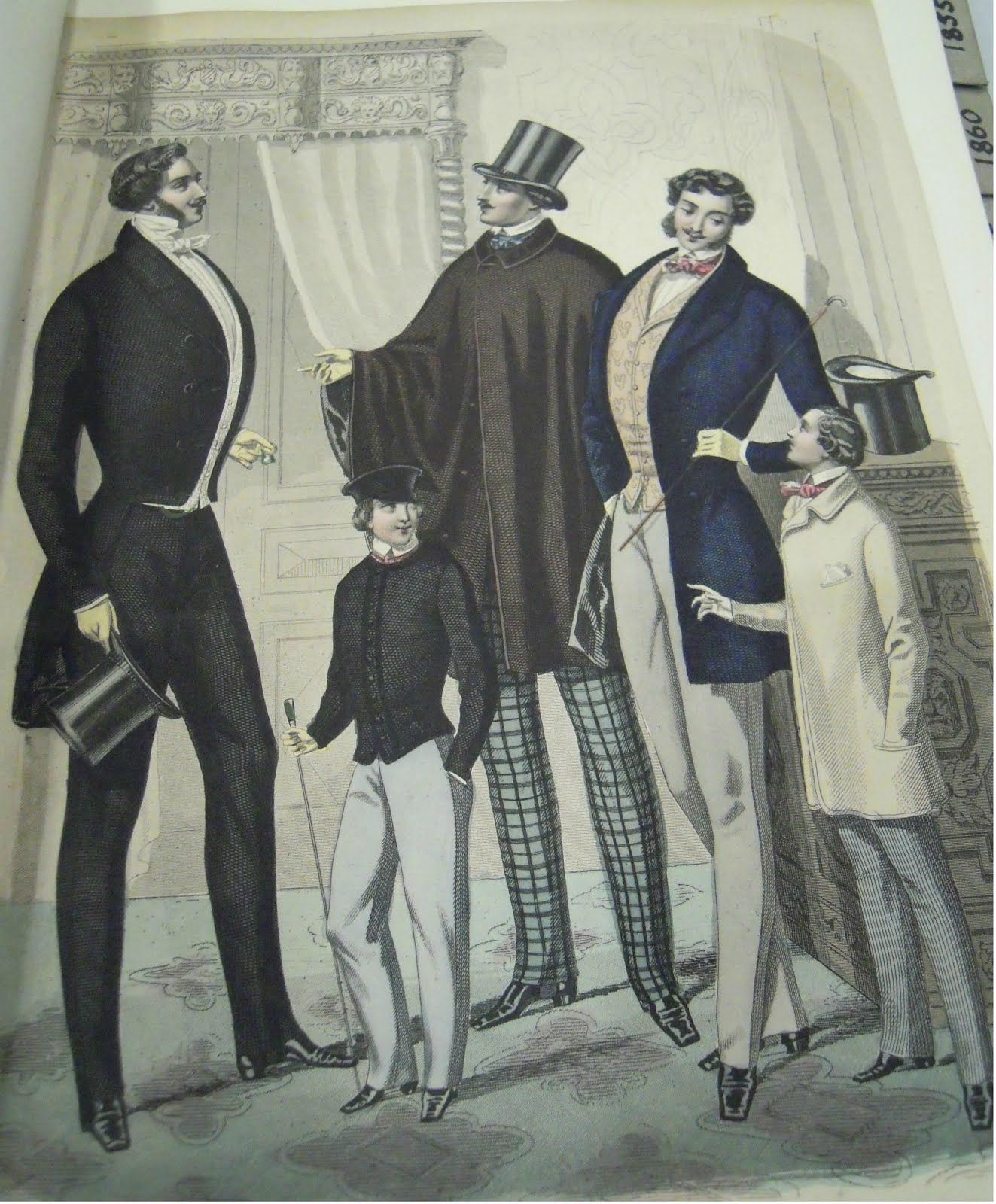 It is not known when the book was compiled, or by whom, but was probably created in the 20th Century as a source of reference and inspiration for students in the costume department who required accurate depictions of that types of dress that fashionable people were wearing in a given year. The scrapbook is part of a small collection of two other books, compiled in similar styles, and possibly by the same hand. One covers mostly male fashions, and the other is a mixture of accessories and ephemera, and dates from the late 18th century. 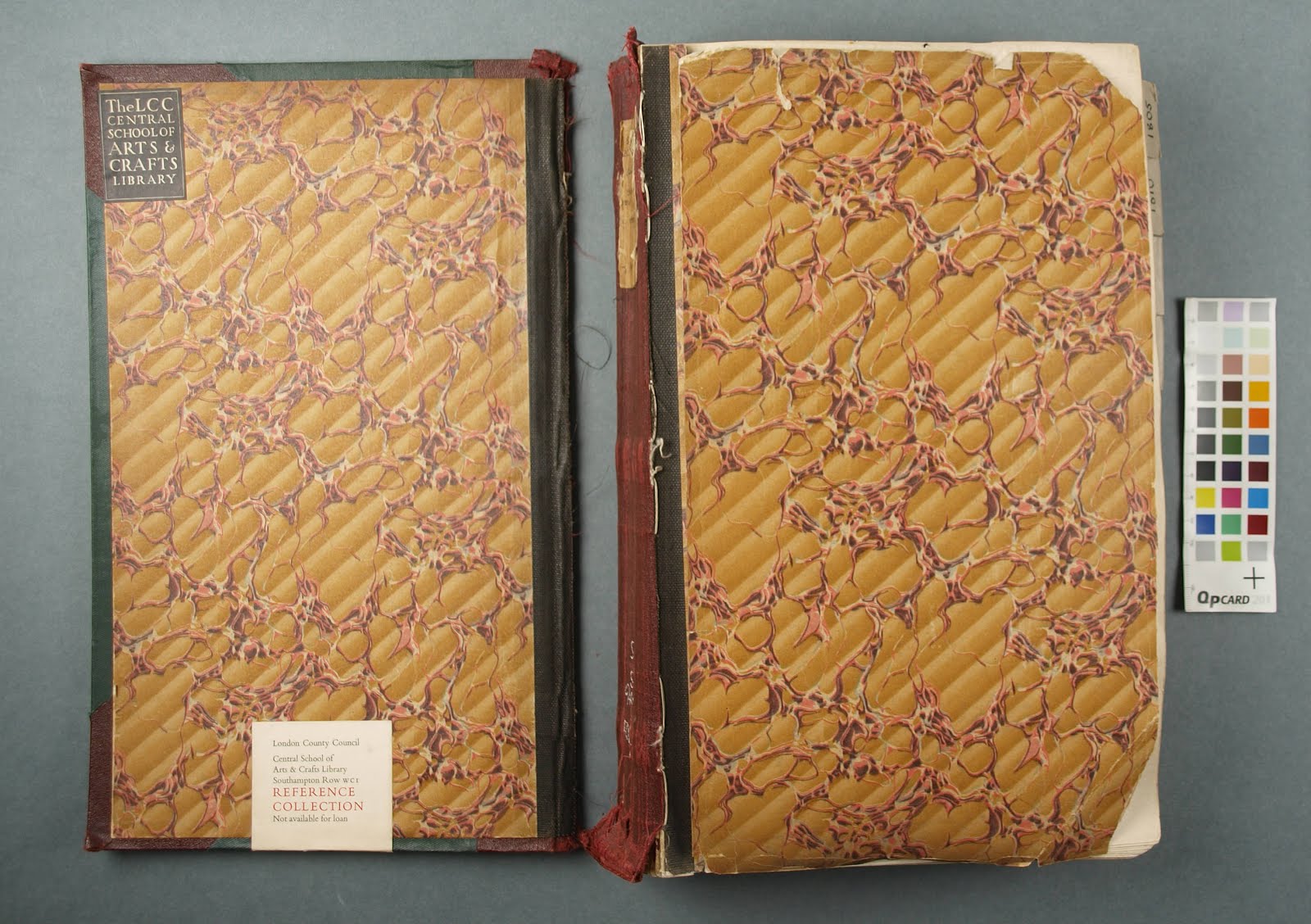 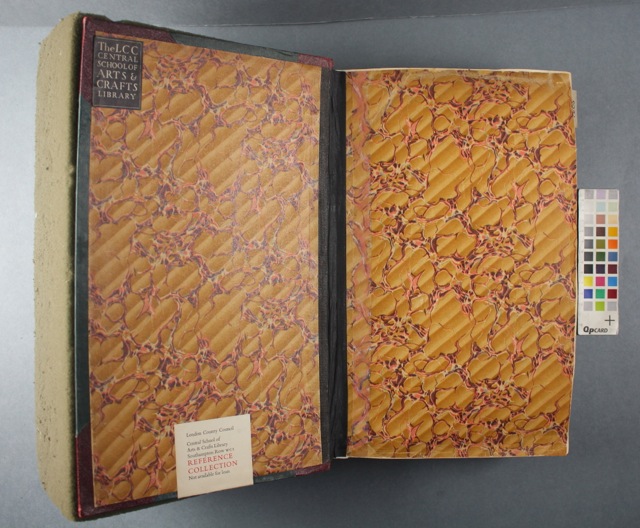 The front board and endpaper before and after treatment

The condition of the book was poor, and prior to treatment it was inaccessible to handling, display and research. The front board and endpaper were detached, and the textblock was damaged. The plates were distributed in an very unbalanced way, with some pages overcrowded with up to 13 plates, and others left blank. Upon discussion with the curator, it was decided that some plates could be moved in order to make the book functional again. The plates were to be kept in the same order as they were originally placed, and within the same time ranges as assigned by the dated tabs. As time was limited, a list of treatment priorities was drawn up for the plates, which included : pages with too many plates, those where the plate was extending beyond the foredge, and plates which were detached or detaching - due to failing tape. The aim of the project was to keep the integrity of the scrapbook while working to make the book accessible for handling and research. 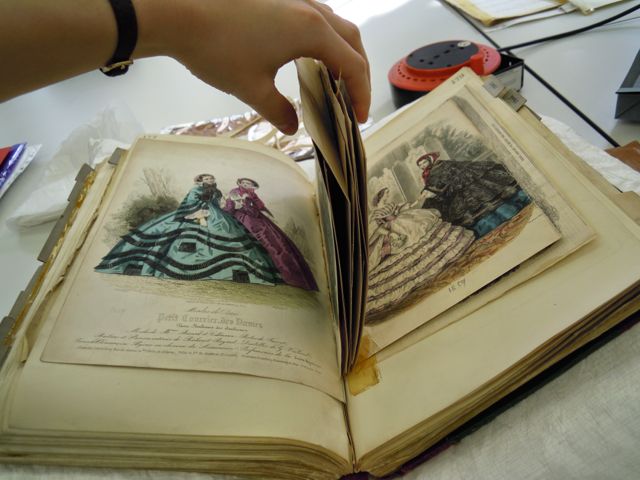 The most common tape in the book was a rubber based adhesive with a clear, though discoloured plastic carrier- which when tested was cellophane. Several methods of tape removal were trialled (including the solvents acetone and petroleum spirits) and the most effective was found to be a heat spatula for the carrier, and cellulose powder used with a spatula to remove the sticky adhesive. Stain removal was not considered essential and so was not attempted. The plates were then repaired as required using 9 gsm maruishi and 20% w/v wheat starch paste.

As the plates had originally been hinged to the page using tape, it was considered important to create a sympathetic method of attachment. Hinges were made from 23 gsm kozo shi Japanese tissue, and were re-adhered to the textblock using wheat starch paste. It worked best when the plates were adhered to the right hand page, with hinges on the left side of the plate, as this allowed them to follow the motion of the page as it turned. This was not always possible, as some had to be placed on the left hand page, and have right hand hinges, or be tucked into the gutter in order not to catch when the page was turned. The plates were staggered on the page where appropriate to avoid the central buildup of material that had been causing the binding to bow in the middle. 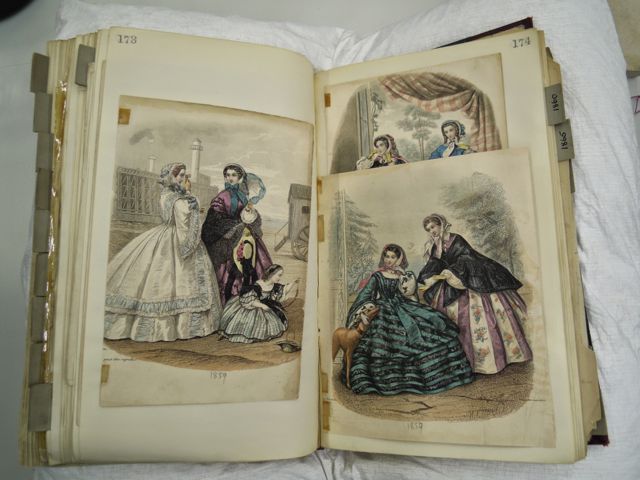 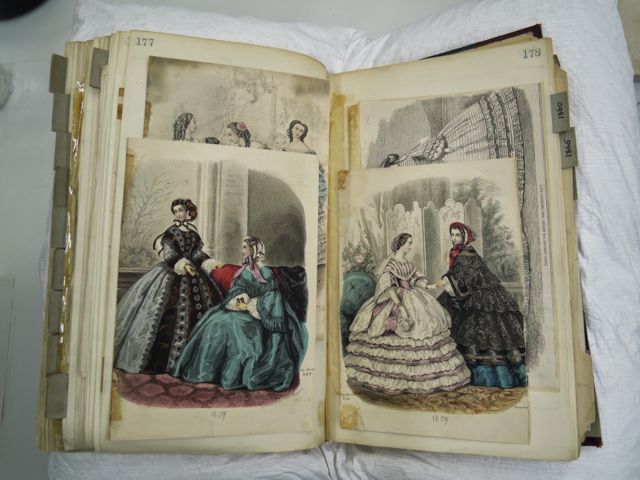 The plates after treatment

In total, 100 of the 191 plates were successfully treated in this way. The front endpaper was reattached using 23 gsm kozo shi toned to match the pattern of the marbled paper, and the tears within the textblock were repaired with 9 gsm maruishi. The textblock split in one section during treatment, and so three additional linen tape supports were added and sewn in. The bookcloth spine cover was removed, the spine somewhat reshaped using a poultice of 3% solution of methylcellulose, and a lining of kozo shi was added. The front board was split and reattached with an aerocotton spine extension. A manilla hollow was then created to add strength to the weak structure, the original cloth was lifted and a toned buckram bookcloth was used to reback the scrapbook.

The project met all of the aims set out, and the book is now fully functional as a scrapbook and available to be accessed. It was never anticipated that the book could be treated in its entirety during the time frame of the project, and so there is still work that could be further carried out to treat the plates and remove the remaining tape, and this can hopefully be carried out in the future. 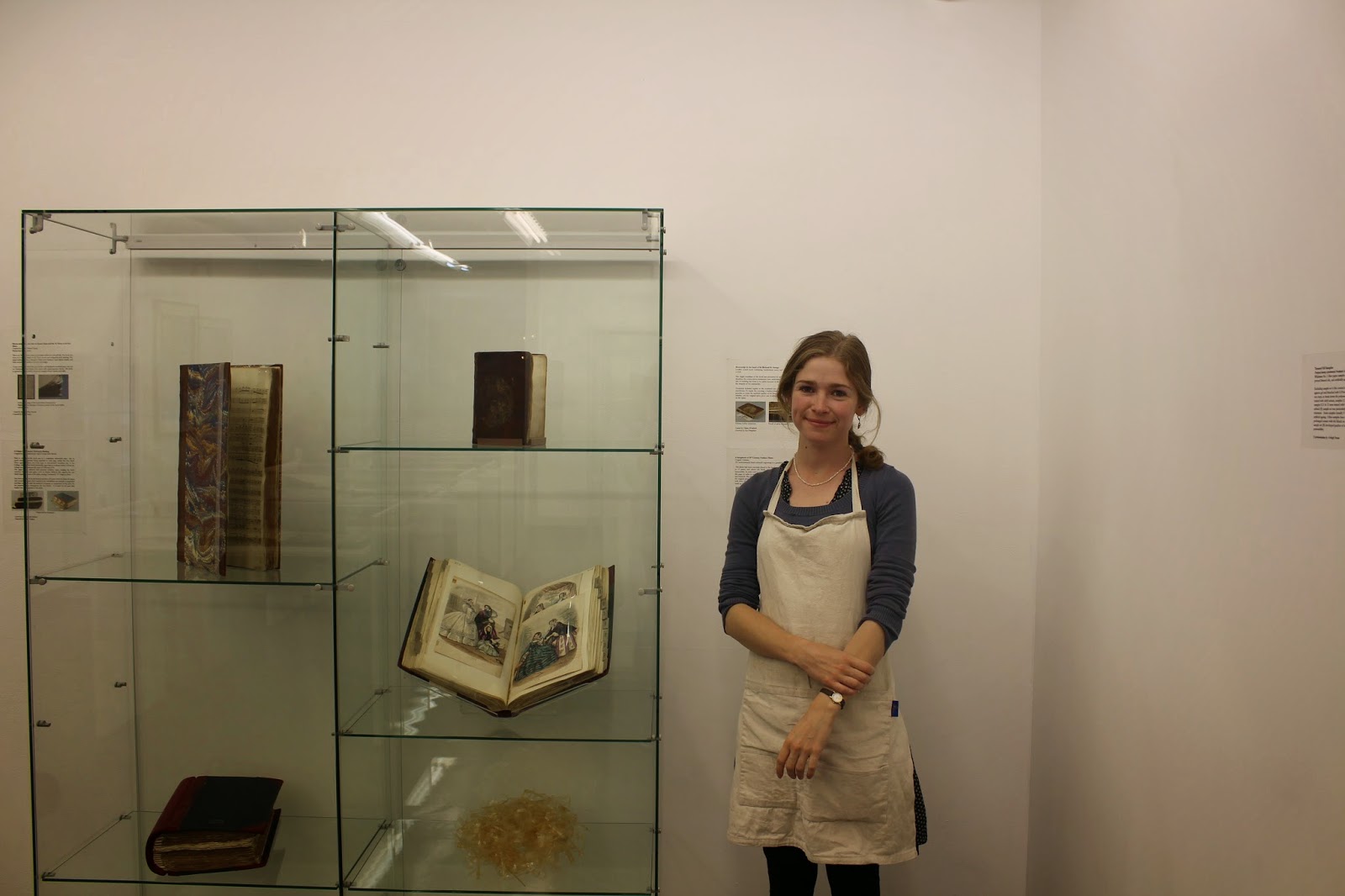 Done! The scrapbook on display at the MA Conservation Final Show at Camberwell College of the Arts June 2014
Posted by www.conservationandcats.co.uk at 14:05