These four plans were part of a larger collection of objects that came to us for treatment from the Looe Harbour Commissioners. The plans all date from or around 1846, and relate to a proposed new bridge and fish market in the town.

Tracing papers (or transparent papers) were commonly used for architectural plans as they allowed easy reproduction. The papers were made translucent through a variety of methods, including impregnating with oils or other agents, heavily beating the pulp in the manufacturing process, or by treating the paper with chemicals. These papers do not tend to have very good ageing qualities; over time they often become acidic and brittle, which is exacerbated by use and the fact that they are often stored rolled or folded due to their size and quantity in collections. 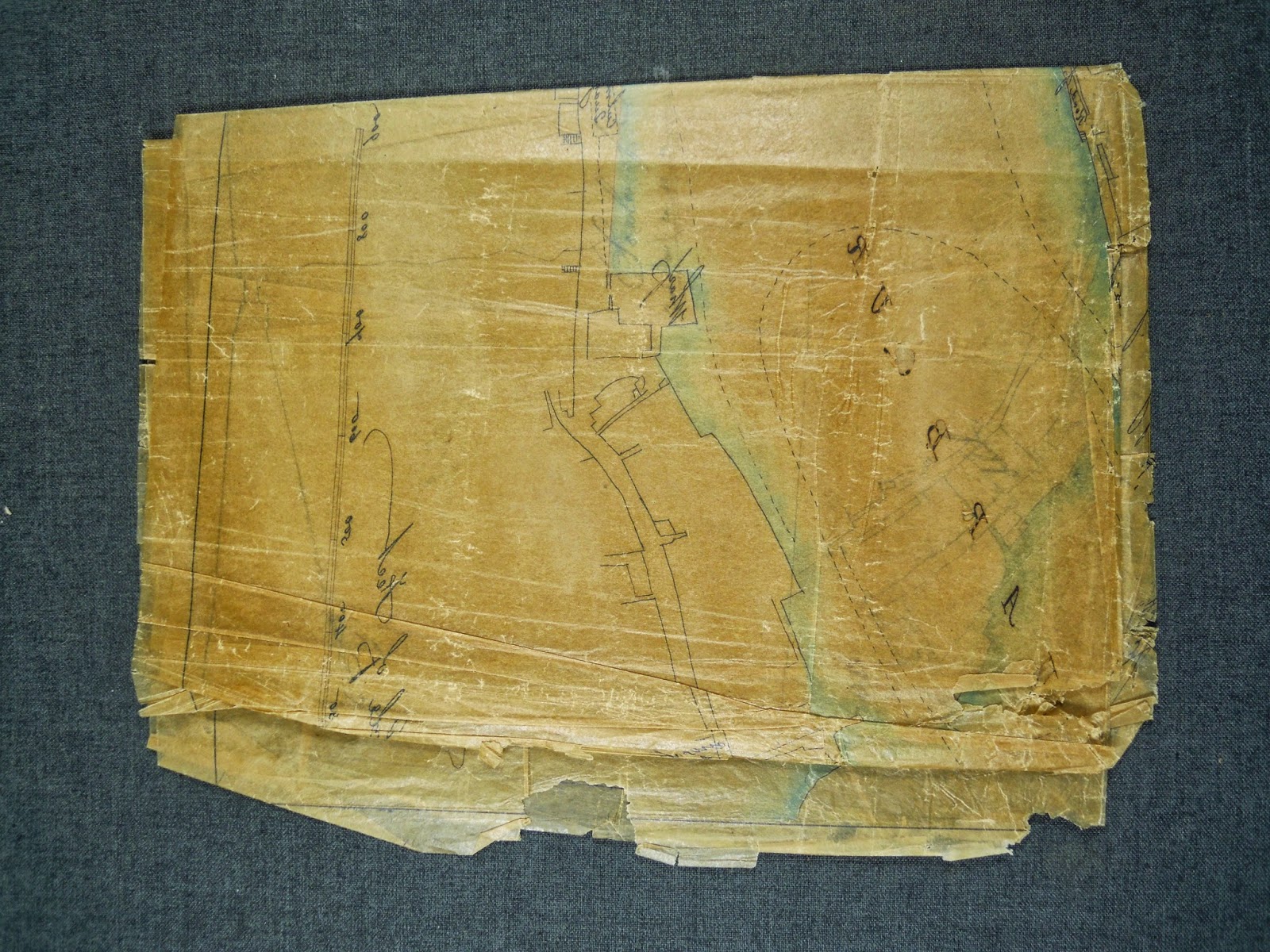 The plans themselves, and the information they held was completely inaccessible, and this was the main consideration of the project. The tracing paper plans were all very brittle and damaged, with many losses. Three of the plans were folded up tightly, and over time these creases and folds had splits and caused serious structural damage, and the fourth arrived tightly rolled, which caused similar problems. The plans were very awkward sizes, and I nicknamed each for their features: 'long', 'large', 'rolled' and 'small' (relatively!). 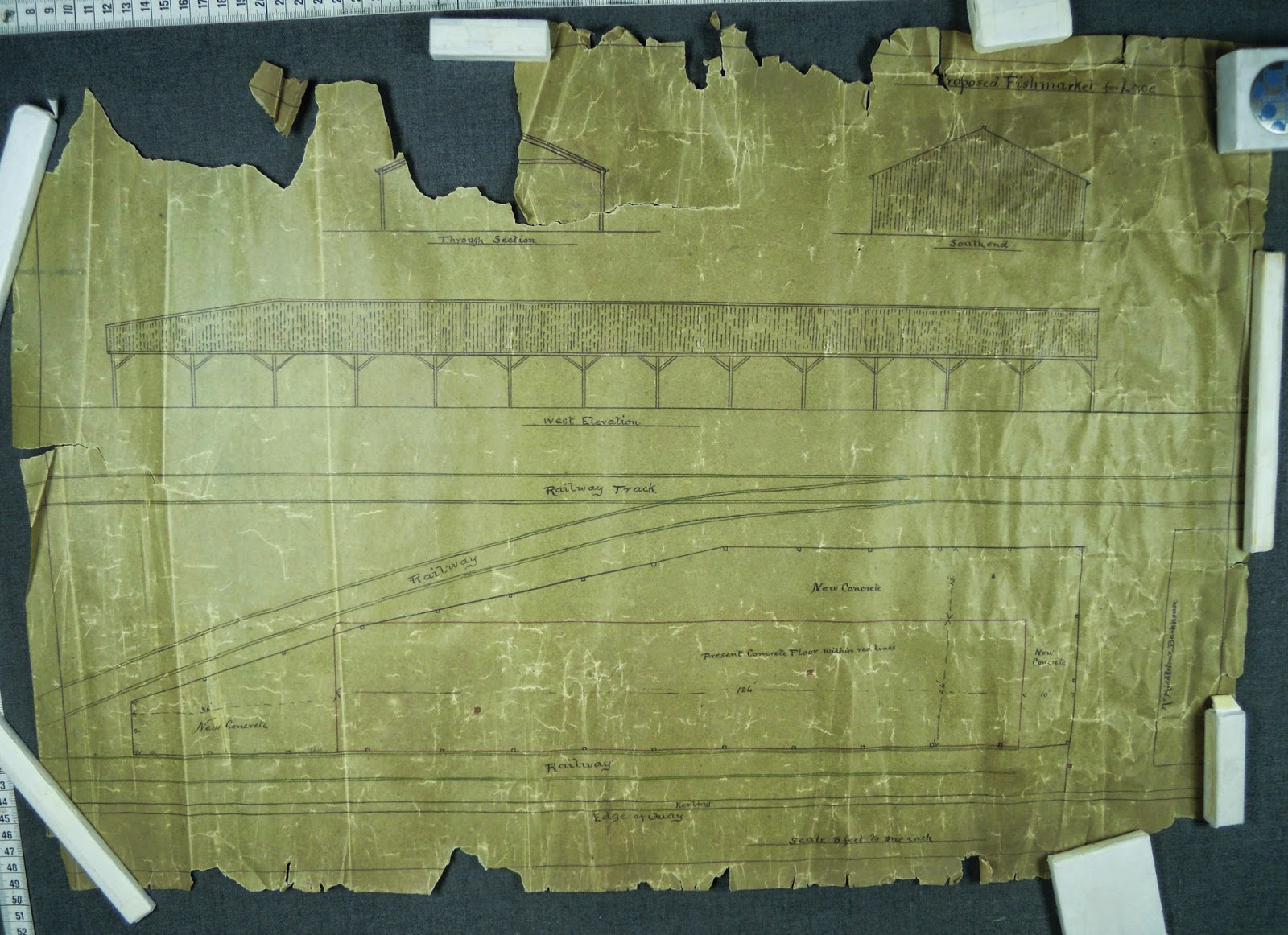 Architectural plans are often very large as they are working objects and need to convey a great deal of information to scale, and these were no exception with the longest plan measuring 145 cm in length. This meant that the plans were difficult to work on, and required a large amount of surface space in the studio.

Besides brittleness and size, the plans also had soluble inks and some serious iron gall ink degradation, all of which made this a challenging and interesting project to work on. The treatments carried out were cleaning, flattening, lining and infilling and repairs.

Once the plans were unfolded and photographed, they were left underneath light weight for a number of weeks to gently flatten them. After this time they were cleaned using a Japanese brush and, where the paper was robust enough, a chemical sponge. As the inks were mostly soluble and iron gall ink was present, overall humidification was not an option. So, just with hands and the occasional use of a carefully placed water pen, the creases were flattened and the plans tensioned and left weighted out with light boards. This process was repeated several times until the plans were flat.

As the plans were so brittle, lining was the next process. As the plans could not be treated with water or water based adhesives, a mixture of 2% Klucel G in ethanol was used. This could be brushed through the very fine 6 gsm Kizuki Kozo Japanese tissue, which was applied in panels at a time for manageability and to avoid any distortions. The plans were then left to dry underneath weight.

The lining was very successful and added a great deal of strength and flexibility to the plans, and allowing them to be handled far more easily. The lining tissue was very fine, which kept the verso of the plans visible and did not really affect the translucent nature of the papers. Some of the smaller creases in the plans were not possible to remove though, and so these were captured in the lining process. This is a shame, but importantly the creases do not obscure or alter any of the information available on the plans. 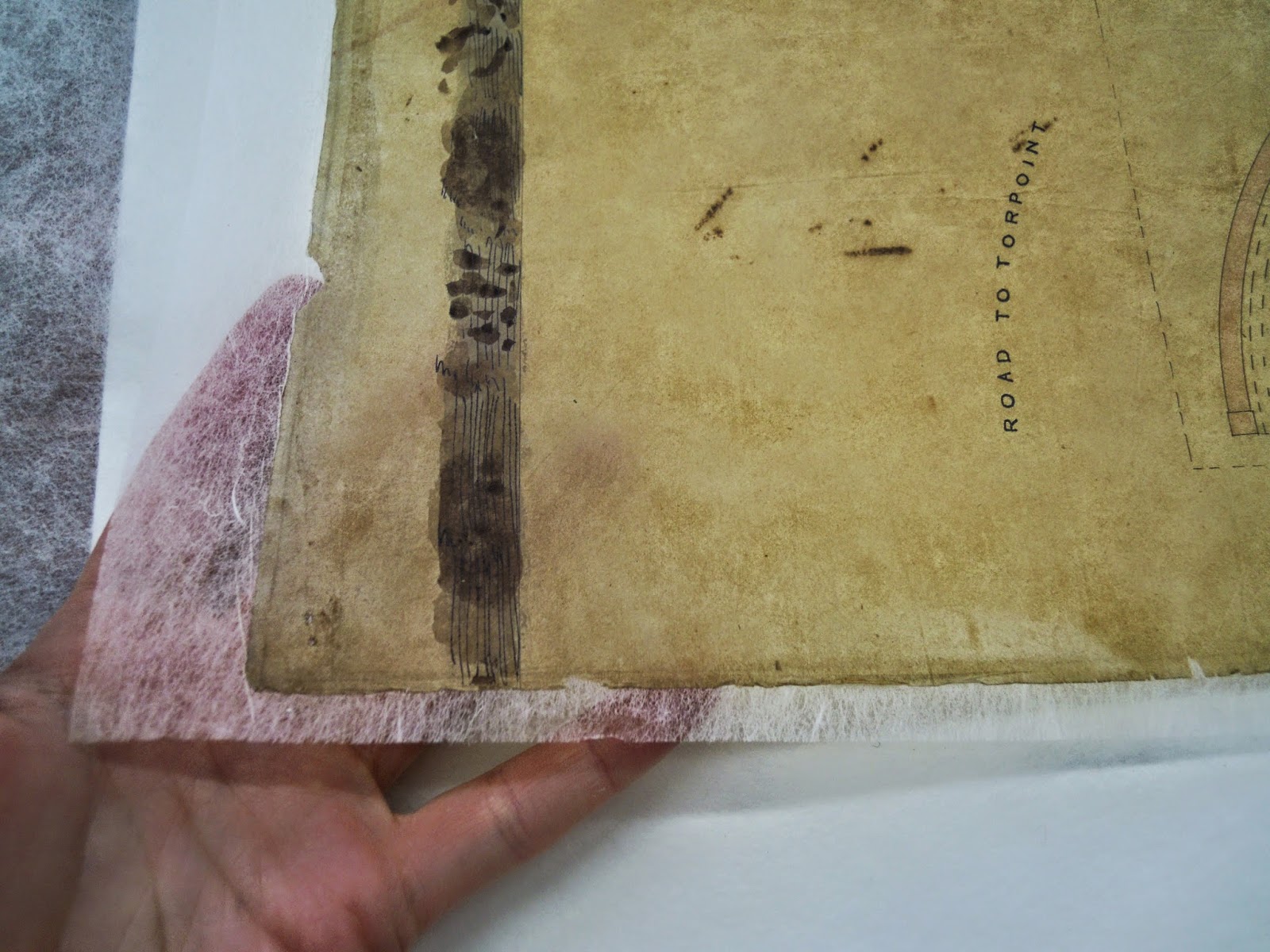 
The four plans after treatment: 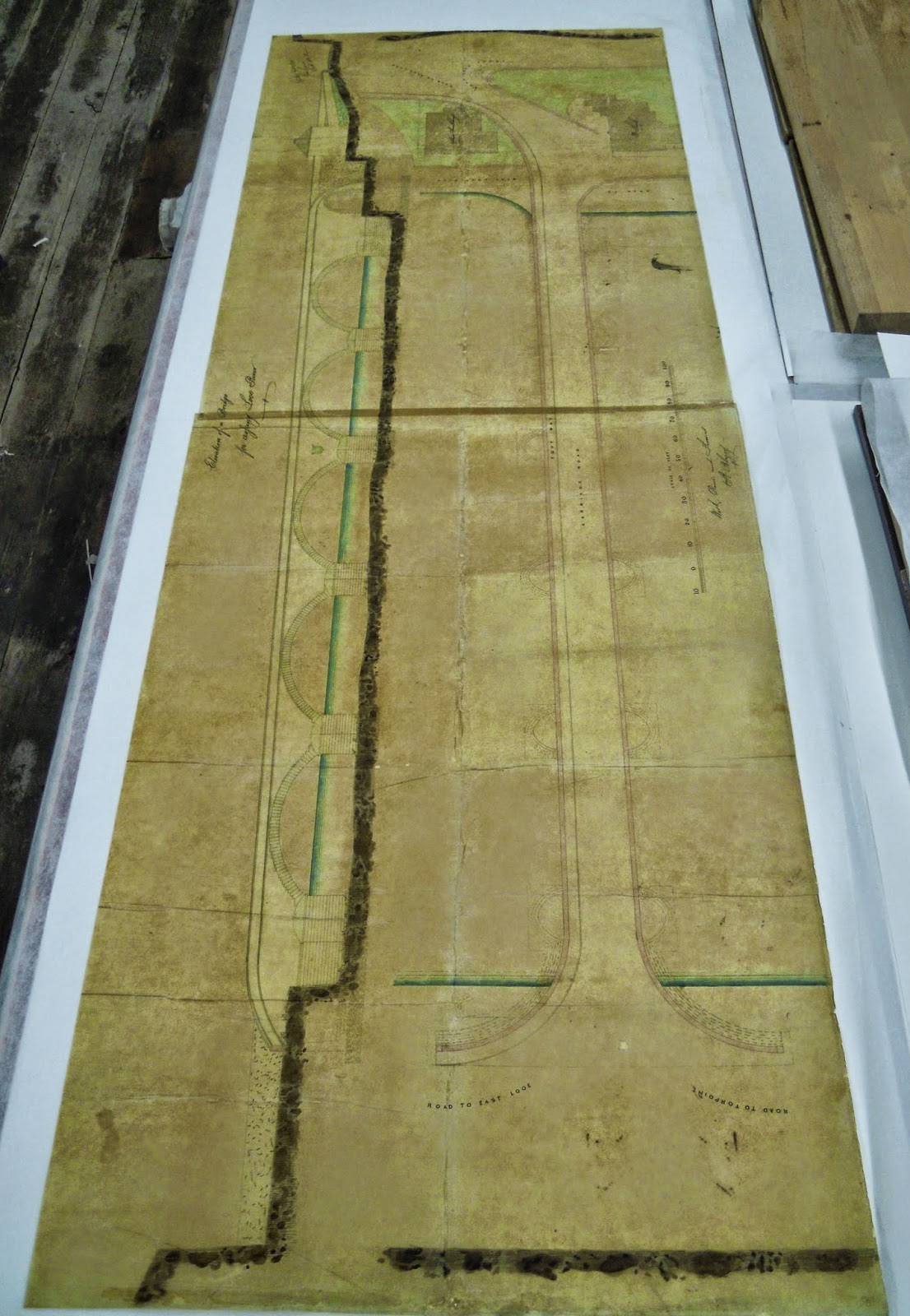 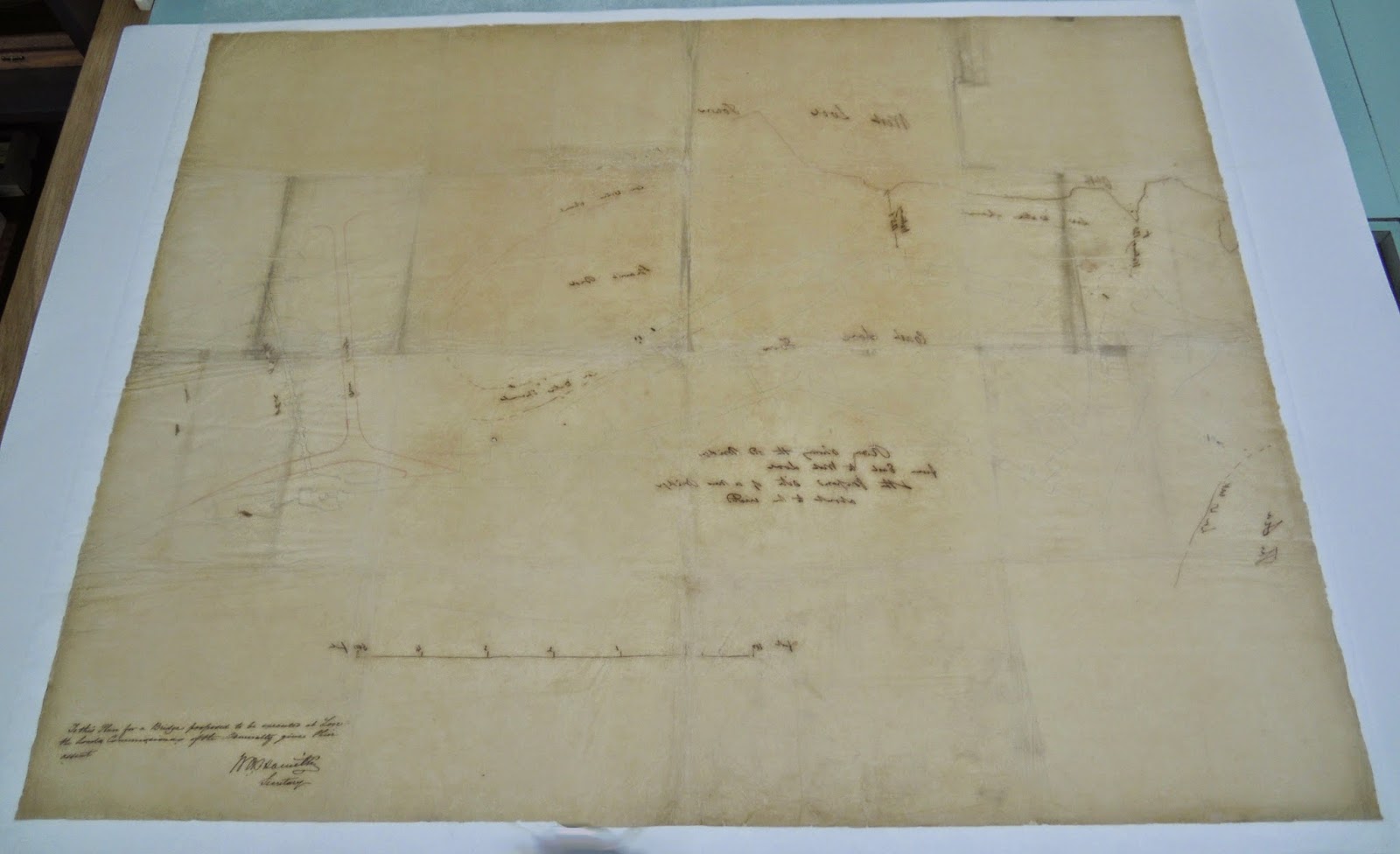 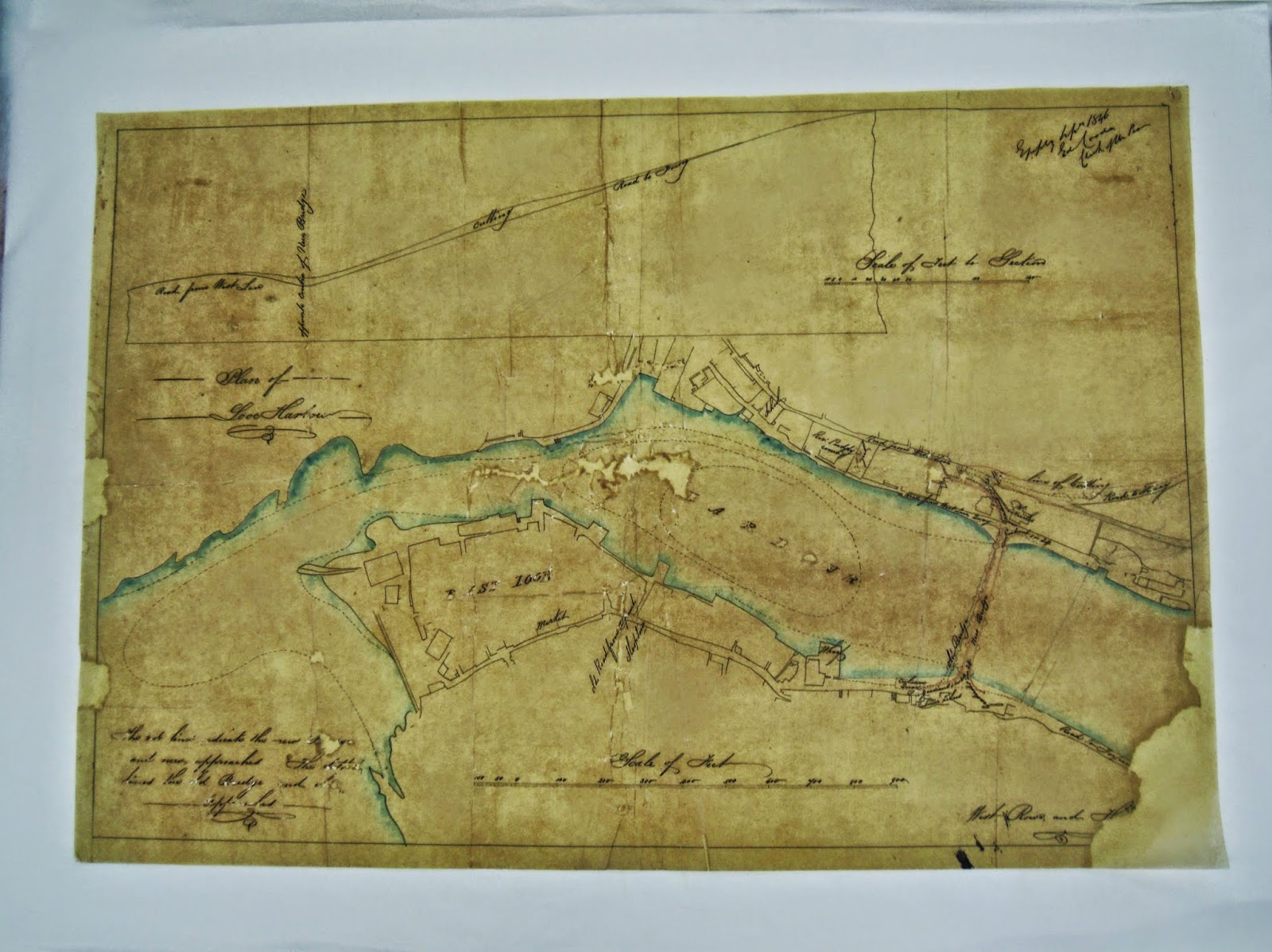 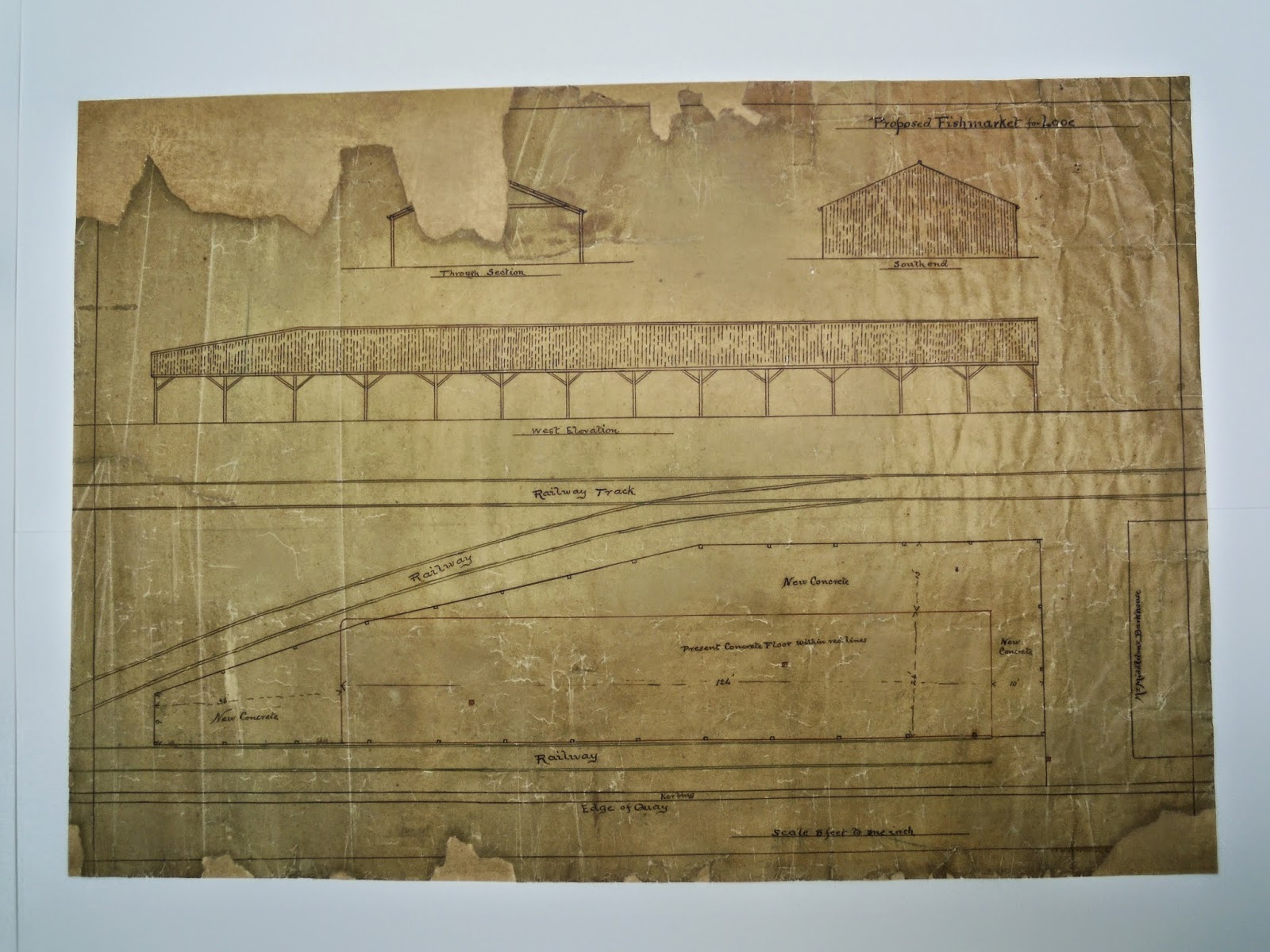 The Looe Harbour Commissioners did not have a lot of storage space, and so this was important to think about when designing housing for the objects. The plans had all grown substantially from the folded / rolled objects that had first come into the studio ! Two of the rolls were of a reasonably small size, and so a four flap folder was made for these, but for the two largest plans something else had to be thought of. Folding a paper object will always cause problems (as we had seen), and as so much time had been spent flattening the rolls, this was not something that was considered. As they were too large to remain flat, rolling was decided upon. 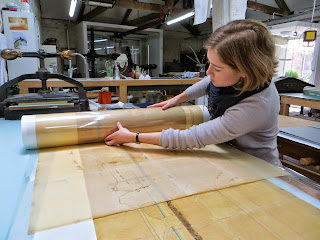 A tube of around five inches diameter was made by rolling archival paper pasted with EVA around an existing tube wrapped in melinex. This method was chosen as the cost of purchasing a ready made archival tube was restrictive. It formed a strong and stable tube around which the two largest plans were rolled with a sheet of 36 micron melinex. The melinex provided a clean and supportive surface onto which the plans could unrolled.

A box was then made with plastazote supports so that the tube was held above the bottom of the box and the tracing paper would have no weight or pressure upon it. The front side of the box also folds down so that the tube can be easily taken hold of. The opening side flap has a cloth attachment for added strength and so that the box is fully sealed when closed. 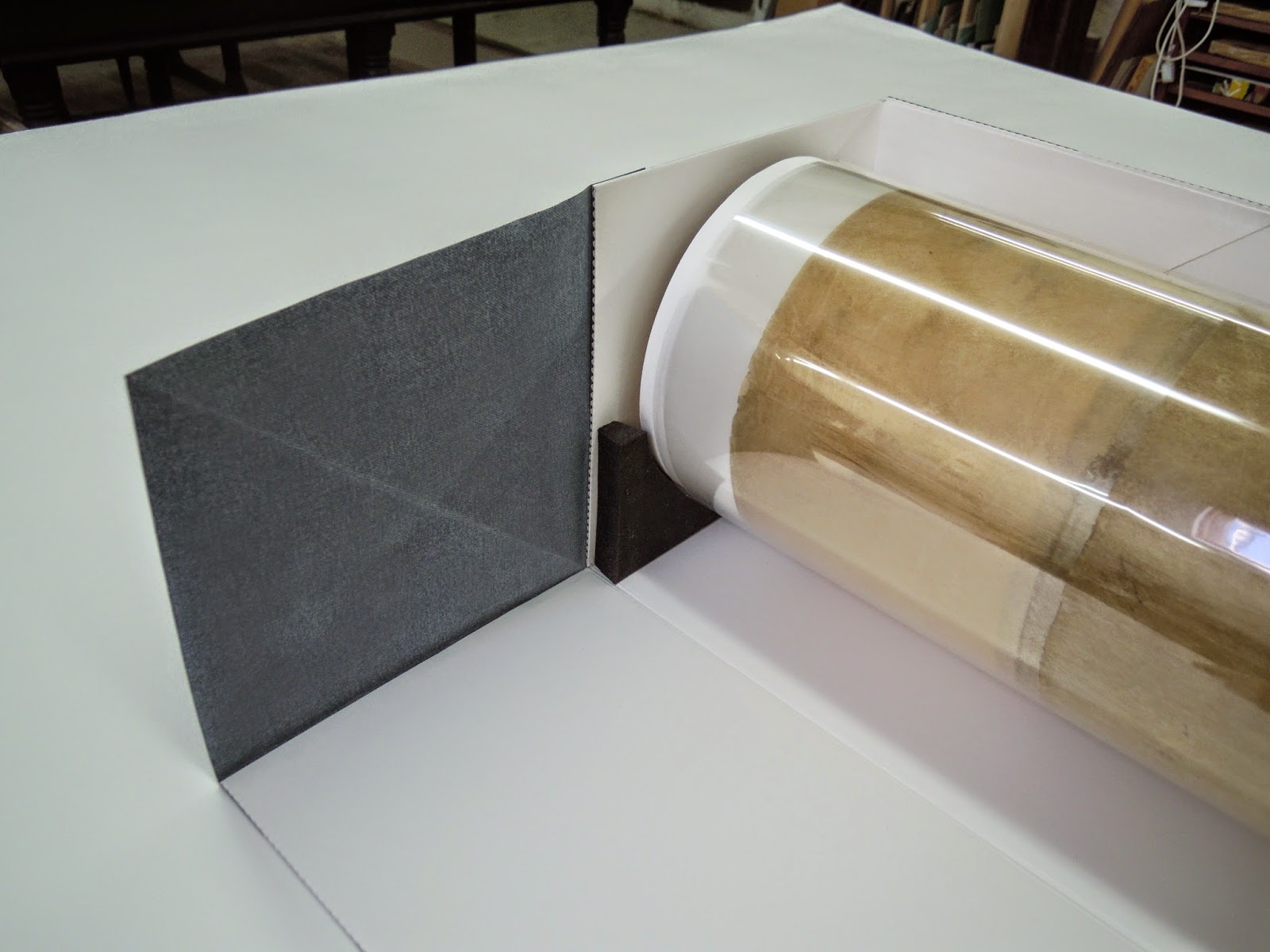 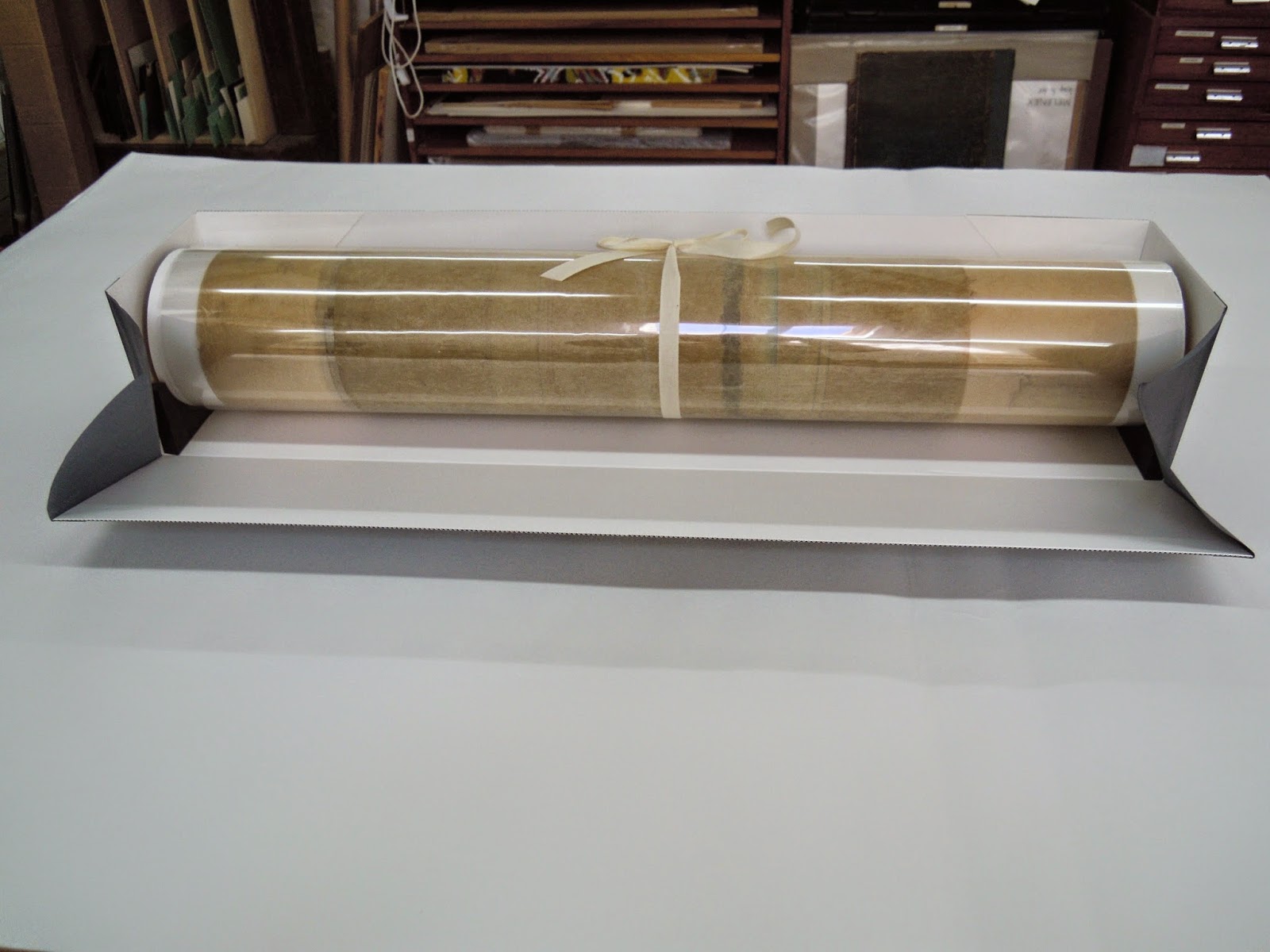 The project has also provided a great opportunity for speaking to people about the work undertaken in the studio, and is of particular interest at the moment as so many collections hold large quantities of (often very large) architectural plans on tracing paper, which are popular, difficult to house and often in poor condition.